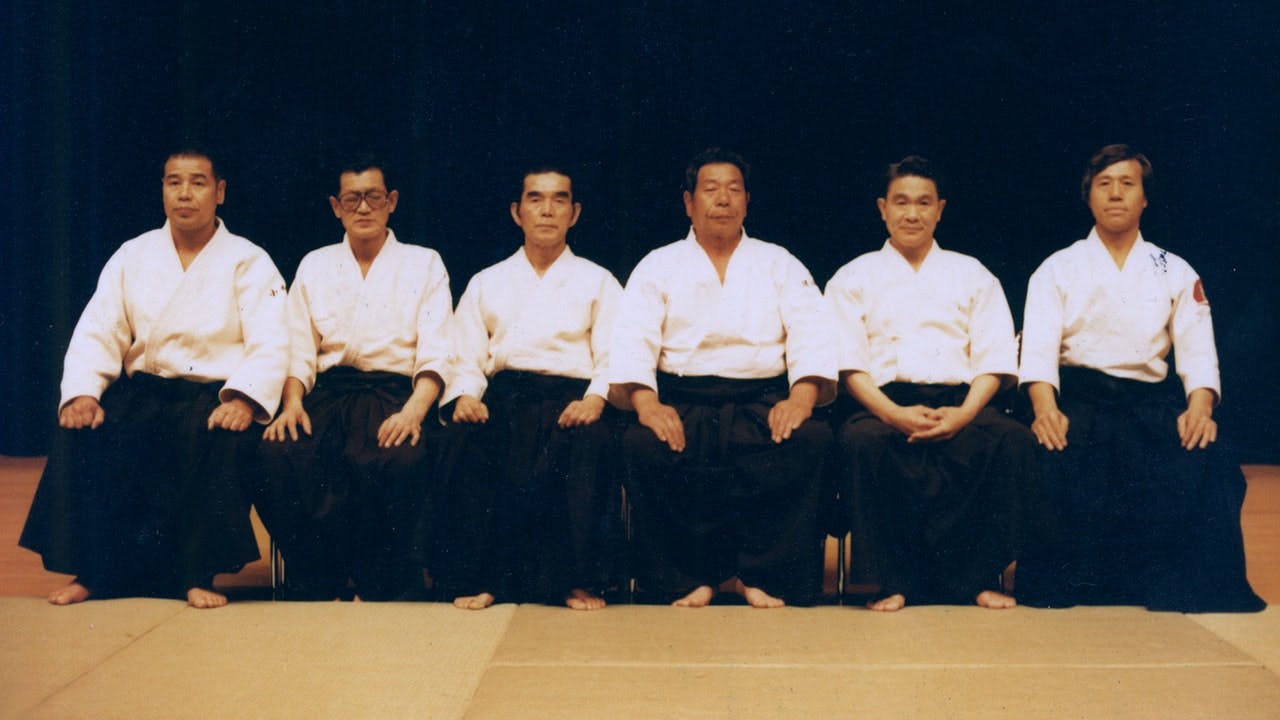 Stanley Pranin described the demo as one of the most significant Aikido events ever held. The demonstration took place in Tokyo in 1985 and was sponsored by Aiki News, the predecessor of Aikido Journal. It attracted more than 900 aikido enthusiasts who spent the better part of the day glued to their seats.

Stanley crafted a unique experience for the audience by departing from a standard 3-5 minute demo format. The six teachers participating had an opportunity to express their training philosophies, and display their technique in depth, each one in turn. In their respective lecture demonstrations, each instructor lays out for you the best of his art.. the product of decades of training under the tutelage of Aikido Founder Morihei Ueshiba. You’ll have these moving images and words—completed translated into English—at your fingertips whenever you need guidance and inspiration in your training.

Included as extras are Yurusu Budo, a 209 page ebook by Shoji Nishio, and Budo, an ebook copy of the 1938 manual featuring Morihei Ueshiba (in Japanese).

Here is the roster of demonstrators, most of whom need no introduction:

MORIHIRO SAITO – One of Aikido’s most famous figures, 9th dan expert in taijutsu and the Aiki Ken and Jo. Famous for his authoritative technical books on aikido, and world traveler in pursuit of the spread of O-Sensei’s art.

SHOJI NISHIO – One of the art’s true innovators, possessor of a dynamic style built on long years of study in other disciplines melded superbly into his unique aikido. Speed, effectiveness, and elegance are the hallmarks of Nishio Sensei’s aikido.

KANSHU SUNADOMARI – An unknown gem in aikido’s history. Did you know Sunadomari Sensei also received an oral 10th dan from O-Sensei? His aikido is amazing and his skills blew away the audience!

YASUO KOBAYASHI – A unique man, very charismatic, who built a huge organization within the Aikikai network in Japan and abroad. His aikido style is classic Aikikai. He still takes ukemi for his students even though he in his 70s.

MITSUGI SAOTOME – One of the most highly regarded of contemporary aikido masters. His style of aikido is minimal and powerful. Razor sharp technique with superb control.

YOSHIO KUROIWA – A little-known aikido genius and former boxer captivated by O-Sensei’s aikido. As a young man he was notoriously strong… Also, an excellent essayist with a compelling message. His aikido is like no other.